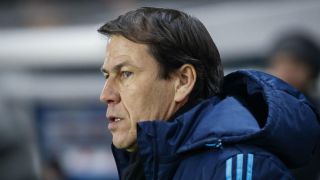 PSG beat their rivals 3-0 in Ligue 1 on Sunday but the victory was soured by Brazil star Neymar suffering a broken metatarsal.

Garcia told a news conference ahead of the rematch that his opposite number Unai Emery still had plenty of options when it came to hurting Marseille but suggested the world-record spend on Neymar might have left PSG short in other areas.

"If there is no Neymar, there will be [Angel] Di Maria," he said. "We will see if [Kylian] Mbappe and [Edinson] Cavani play when there is the Real Madrid game the week after.

"It is a team built to win the Champions League. If they do not, it will be failure.

"They have invested €400million, including €222m that is in the infirmary."

PSG captain Thiago Silva accused Marseille midfielder Dimitri Payet of saying he wanted to hurt Neymar before the latter's injury in a challenge with Bouna Sarr.

Marseille defender Adil Rami insisted he had sought to stay away from such controversy after Sunday's match.

"I don't know if the media are talking too much about Neymar. When I get home, I start my Playstation," he said.

"Without him, PSG will be another team but they remain a great team with a big bench. We cannot celebrate the misfortunes of a player."