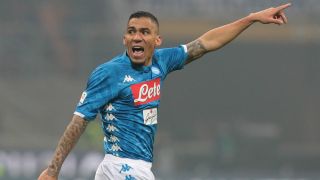 Carlo Ancelotti insisted Allan will not be moving to Paris Saint-Germain, declaring "the matter over" after the midfielder missed Napoli's draw at AC Milan.

Allan was dropped for Saturday's 0-0 Serie A stalemate in Milan amid uncertainty over his future, with French champions PSG reportedly finalising a transfer in excess of €100million.

Ancelotti, however, reiterated his stance regarding Allan, saying the 28-year-old will face Milan in the Coppa Italia quarter-finals on Tuesday.

"As far as I am concerned, the matter is over, Allan will remain our player and we never intended to sell if not for something extraordinary," head coach Ancelotti told Sky Sport Italia.

"The player has been contacted, even though that shouldn't happen, and we listened to his requests, after which nothing happened.

"He will stay with us and play on Tuesday."

Allan – who arrived from Udinese in 2015 – has made 25 appearances in all competitions for Napoli this season, 18 of those in Serie A.