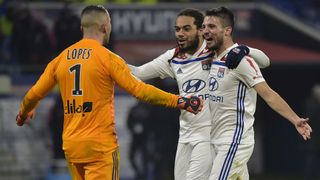 Lyon president Jean-Michel Aulas believes they showed the threat they can pose to Barcelona as they ended Paris Saint-Germain's unbeaten run in Ligue 1.

Champions PSG had won 18 and drawn two of their opening 20 league games this season, but they came undone on Sunday despite taking the lead through Angel Di Maria's strike in the seventh minute.

Goals from Moussa Dembele and Nabil Fekir turned the match on its head and Aulas was glowing in his praise of the team and head coach Bruno Genesio afterwards.

And with a Champions League last-16 tie against Barca getting under way on February 19, Aulas is confident Lyon can spring another shock against a European heavyweight, having beaten Manchester City in the group stage.

"The team played a very good match," Aulas told reporters. "The first half started badly, but we reacted quickly.

"I really take my hat off to the team and to Bruno, who once again selected the right team. Playing with four attackers, as we did, it was ambitious to attack PSG and we made it difficult for them.

"It gives us great satisfaction to stay close to [second-placed] Lille and prepare for the Champions League match against Barcelona, which will be at a similar level.

"PSG looked a bit unnerved by the will and pressing of our players. We may have been thinking about getting closer to Barcelona. It's all great. This is a moment of happiness."

Despite the eye-catching victory, though, Genesio was only concerned about keeping pace with Lille, who are three points ahead of third-place Lyon and thrashed Nice 4-0 on Friday.

"It was very important because Lille won," he said. "We needed to take three points to stay close to them.

"To inflict on PSG a first defeat is rather incidental. The goal is to move forward and to take second place. We remain close to Lille, who are running at full speed."