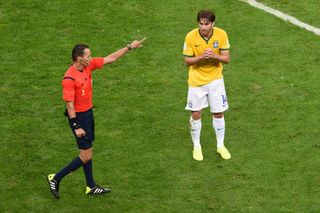 The 33-year-old defender featured for the South American nation at the World Cup, but is yet to be chosen by new coach Dunga.

Maxwell believes his 10-cap career is over, while he may also be nearing retirement from club football.

"At 33 and with the level of the competition there is, the Selecao is over for me," he told France Bleu.

"The experience of the World Cup in Brazil was fantastic at first, but the pressure and the economic environment around us played against us."

Maxwell's contract with Ligue 1 champions PSG expires in June next year, and it could be his last with the French giants.

The former Ajax, Inter and Barcelona defender is unsure whether he or the club want him to continue, while he is happy to explore other opportunities.

“I do not know yet if I will extend my contract or not. I have not made a decision," Maxwell said.

"We will see in February, we will know more then. Maybe this is the end, maybe I will continue. It depends on what the club wants and maybe on the offers I will have."