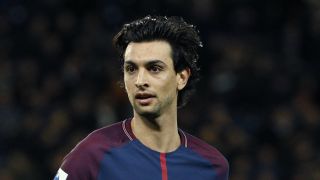 Javier Pastore accepts he may have to leave Paris Saint-Germain before the transfer window closes to boost his chances of being selected in Argentina's World Cup squad.

Having started only eight Ligue 1 matches for the leaders this season, the playmaker is aware he has a bit-part role under Unai Emery.

Pastore has been linked with a move to Inter but time is running out to make a decision over his future, with the transfer window set to close on Wednesday.

"I do not know what I'm going to do," Pastore told reporters after PSG brushed Montpellier aside on Saturday, Edinson Cavani breaking Zlatan Ibrahimovic's club goals record in a 4-0 rout.

"I'm in a difficult situation and I have a difficult choice to make. Here I'm very good, I'm very happy and it's my city. There is still nothing decided. The only thing I want is to play a lot more to try to go to the World Cup.

"If I'm not in the squad at the end of the season and I stayed here and I did not play, it will stay in my head until the end of my career. I then wouldn't have done everything to go to the World Cup."

And former Palermo player Pastore acknowledged a return to Italy may be the best step for this stage in his career.

"In the last international games, the coach [Jorge Sampaoli] didn't call me up," Pastore said.

"That's normal, because in Argentina there are a lot of good players, you have to be competitive to get more chances, and here I do not [play]. I always have to wait for someone to be suspended, or get injured to play, it's not great.

"It also depends which club I go to. We must see if this club really needs me, otherwise I will stay here all my life.

"There is a lot of talk about Inter and if I were to leave, I'd like to go there, especially as I know Serie A and my wife is Italian.

"Inter could be a solution, but I don't know what will happen. It's not an easy decision for me or the club. We'll see over the next few days and try to reach an agreement."

Pastore returned to PSG late following Ligue 1's mid-season break and earlier this month he denied claims by captain Thiago Silva he has asked to leave the club.