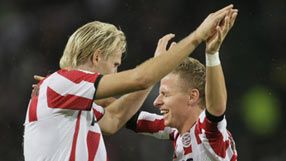 GEAR:Get a new PSV shirt with 'Affelay' on the back here and save yourself 10%

Feyenoord, traditionally one of the 'big three' clubs in the country and European Cup winners in 1970, were reduced to 10 men on 34 minutes when midfielder Kelvin Leerdam was sent off.

Their previous worst defeat was an 8-2 loss to Ajax Amsterdam on September 18, 1983.

"This really hurts, suffering a defeat like this and it was very emotional in the dressing room afterwards," Feyenoord coach Mario Been told reporters.

"It is hard to realise what happened," added left back Tim de Cler. "After the first goal and the red card everyone just played their own match and we totally collapsed."

Feyenoord are 16th in the 18-team league with eight points.

Ajax Amsterdam slipped to third with 21 points after a 2-2 draw at Excelsior Rotterdam, who took a 2-0 lead after Ajax's Vurnon Anita was sent off.