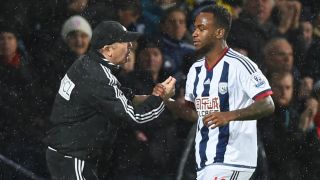 West Brom manager Tony Pulis insisted striker Saido Berahino will get his move if he continues to work hard and perform at The Hawthorns.

Berahino was the subject of bids from Tottenham and Newcastle United in the past two transfer windows, with the England youth international's form affected as a result.

At the time of Tottenham's interest in September, Berahino claimed he would never play for chairman Jeremy Peace again, though the 22-year-old eventually apologised to the club and supporters prior to his goalscoring performance in Saturday's 3-2 Premier League win over Crystal Palace.

And after helping WBA to victory, Pulis has challenged Berahino to put himself in the shop window.

"If he plays half the season now like he did, everybody will start talking about him. His mind is clear and he is set on his football again," Pulis said.

"I have had lots of conversations with him. It has not been a short period. This has been over three windows. Every window that opens up, he gets driven in a direction that maybe a more experienced or stronger character would deal with.

"He is a young lad, and he speaks to a lot of people and a lot speak to him. He gets pushed from pillar to post. You can speak to him, you think you have got him, and all of a sudden you lose him again.

"He is not a bad lad. I have been round to his house, I have met his mum, they are nice people.

"The most important thing is that he has a God-given gift and he should squeeze the pips from it, and have a great, great career."

Pulis added: "Everything will follow, whether now, tomorrow or the next day. If he is playing well, he will get the recognition. And the move. He wants to play for a top-four team.

"I don't think it is the money, it is the opportunity and the chance to show how good he is. You can't take that from the boy. You can't tell him not to want that.

"It makes people become stronger and better. He is a driven person, he has that ambition. You don't want to take that from him.

"He can't go anywhere, he is with us now, and he has to get himself fit and put himself in that position again that he was last summer. If it happens, it happens. If not, he has to keep playing and that is what he has done."