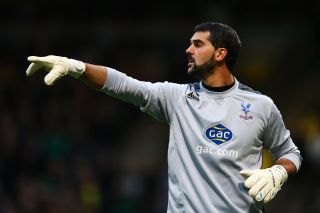 Goalkeeper Speroni has spent the last 10 years at Selhurst Park, but is out of contract at the end of the season.

The Argentinian has played every Premier League game for Palace so far this campaign, and Pulis is keen for the 34-year-old stalwart to remain with the London club.

"Speroni, along with half a dozen of the other players, has been absolutely superb since I have come into the club (in November)," Pulis said.

Speroni has made no secret of his affection for Palace, but is unsure of whether he will stay.

"We haven't spoken (about a new contract) as of yet so I don't know what's going to happen," Speroni commented.

"I love this club. I've been here 10 years now. But in football you never know."