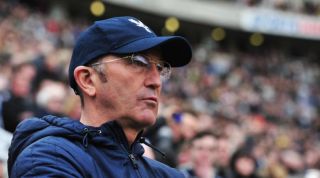 Chelsea are in second spot in the standings but Manchester City, three points adrift in third, are in pole position with one match in hand.

Pulis' side were beaten by title hopefuls City last week but it did not mean much for the London club, who had already preserved their top-flight status for another season.

Having already successfully avoided relegation, many expect Pulis to ring the changes for Liverpool's visit but the 56-year-old has no plans to tinker with his squad with so much left to play for in the title race.

"I think it's my responsibility to pick the strongest team, and the team that's done the best," said Pulis.

"If I make too many changes for the Liverpool game I think that might cause some problems.

"Having said that I see Jose made a lot of changes and won at Liverpool, so maybe I'll ring him and ask him "what's the best way to go?"

However, with survival assured, Pulis admits it is a tough task keeping his players motivated during the closing stages of the season.

"I've been in this position before once you reach safety," said Pulis.

"There's another game against a fantastic football club coming up, a night game where there will be a great atmosphere here.

"And I just hope the players are on it and we give a real good show."