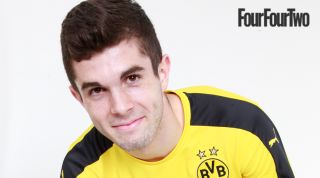 The Reds have long been linked with a move for the Borussia Dortmund attacker, who last season became the Bundesliga’s youngest-ever non-German goalscorer, shortly before becoming the youngest United States scorer in the modern era.

Arsenal and Spurs are also believed to be keeping tabs on the talented teenager, who was part of BVB’s youth ranks during Klopp’s final season at the Westfalenstadion.

But any hopes of a swift reunion were dashed in the New Year when Pulisic signed a new deal with Dortmund, tying him to the eight-time German champions until June 2020.

Speaking exclusively in the April 2017 issue of FourFourTwo magazine, Pulisic says: “I have respect for Klopp and I know him – he was very welcoming to me here – but I was never really thinking about going to Liverpool. Borussia Dortmund have given me everything. If I work very hard here, I will play, and I love this club. I’m happy in the city, I’m just really content with everything here at the moment.”

Pennsylvania-born Pulisic lived in England for a year when he was seven, playing for Brackley Town’s youth team to aid his development. The 18-year-old reveals that he also trained with Spurs and Southampton before joining Dortmund.

“I had a few training sessions with Tottenham and Southampton,” he says. “I played for the US national team in some tournaments in Europe and Dortmund had scouts there. I knew about how Dortmund developed young players. I came here, liked it a lot and they offered me something that I could not refuse.”

Pulisic is already closing in on a half-century of first-team appearances for die Schwarzgelben since making his debut at the end of January 2016 – featuring against Bayern Munich in the Bundesliga, Real Madrid in the Champions League (above) and Liverpool and Spurs in the Europa League – and even the winger himself is surprised by his rapid rise to prominence.

“If you’d asked me three years ago when I started with the youth team, I did not think I’d be in this position today,” he says. “Scoring my first goal was incredible – you never forget your first goal. I celebrated by doing a dab because I didn’t know what to do! My family were proud of me. It must have meant a lot to them, too.”

Read the full interview with Christian Pulisic in the April 2017 issue of FourFourTwo magazine. Featuring some of the best young players in the world, we also chat to his Dortmund team-mates Julian Weigl, Raphael Guerreiro, Ousmane Dembele and Alexander Isak, and meet up with Dele Alli to talk fame, his unlimited potential and his pooch Hugo. Plus, we sing Happy Birthday to Bayern Munich whiz kid Joshua Kimmich, speak to Ademola Lookman about making the jump from League One Charlton to Premier League Everton, profile 18-year-old Milan goalkeeper Gianluigi Donnarumma and wonder whether Ravel Morrison will ever fulfil his potential. Elsewhere, Newcastle Enfield entertain Sunderland RCA in the ‘other Tyne-Wear derby’, Colchester keeper Dean Brill reveals the unglamorous reality of a deadline-day transfer and we go One-on-One with Damien Duff. Order it now, then subscribe!