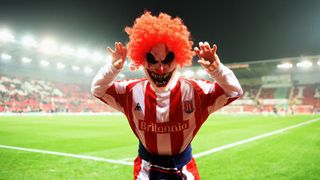 Sporting stars around the world were celebrating Halloween on Monday, getting into the spirit by dressing up and carving pumpkins.

The likes of Cristiano Ronaldo and Patrice Evra displayed a penchant for the eccentric, while former Liverpool man Luis Garcia poked fun at Chelsea fans.

Away from football, former women's singles number one Caroline Wozniacki changed from her usual on-court outfit, while the England rugby team picked a Halloween XV.

Here, we look at some of the best Halloween posts from the world of social media.

Arguably one of the more subtle Halloween jokes, Garcia made fun of Chelsea supporters for his infamous 'ghost goal' in the Champions League semi-final second leg in 2005.

Wozniacki, meanwhile, was seemingly enjoying life inside a giant pumpkin.

Manchester United superstar Paul Pogba posted a creepy-looking snap on Instagram, while Ronaldo - not usually one to hide his face from the cameras - donned a mask as part of his outfit.

In MLB, the World Series between the Chicago Cubs and Cleveland Indians is heading into game six, which seemingly pleases the Cubs' Anthony Rizzo.

When you go to the house that gives out king size chocolate bars … October 31, 2016

The Atlanta Falcons retweeted the impressive pumpkin carving skills of their fans, while Arsenal goalkeeper Petr Cech showed his own prowess.

With the scary prospect of the autumn internationals on the horizon, England's rugby union account created a Halloween themed XV - 'Gory Underwood', anyone?

Happy Halloween Here's your England Rugby line-up for tonight...Got a good one? Tweet it with ! October 31, 2016

And finally, Tottenham put Vincent Janssen, Kyle Walker and Georges-Kevin N'Koudou to work, the trio using their skills to avoid being eaten by zombies. Only on Halloween...