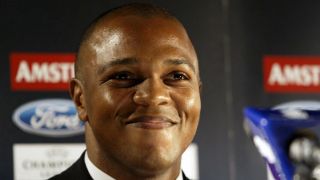 Quinton Fortune feels Manchester United do not need to enter the transfer market this month, due to the number of quality players already at Louis van Gaal's disposal.

United spent heavily in the previous transfer window and have again been linked with a host of players as they seek to improve on a current Premier League placing of fourth.

However, Fortune - who spent seven years at Old Trafford - believes United boast the necessary strength in depth to steer clear of January purchases.

"They have the quality. Good young players," Fortune told Perform.

"Going forward, in attack, you've got [Radamel] Falcao. They've brought in [Daley] Blind into midfield, [Marcos] Rojo the Argentinian and obviously [Angel] Di Maria, [Luke] Shaw at the back. They've got enough quality.

"Unfortunately they've picked up a few injuries. I'm sure when everyone's injury free they are capable of putting on a great run.

"I just think it's a matter of time before it will all click and we'll see United hopefully - I'm trying to be positive here - back where they belong."

United face League Two Cambridge United in the FA Cup on Friday, before returning to league action the following weekend with a home game against Leicester City, 5-3 winners over Van Gaal's men in September.