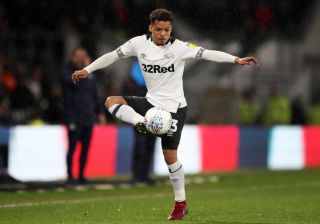 Brentford said they ‘utterly condemn discrimination’ after a season-ticket holder was arrested following an allegation of abuse by Derby midfielder Duane Holmes, while Wigan have reported a sickening message sent to wing-back Nathan Byrne on social media to the police.

Holmes, 24, was substituted in the 74th minute of the meeting with Derby, with the incident occurring nine minutes after the Bees’ third equaliser in the 3-3 draw at Griffin Park.

A statement on the Brentford website read: “Brentford Football Club can confirm that a season-ticket holder was arrested following today’s game against Derby County.

“The man in question has been accused of committing a racially-aggravated public order offence in the later stages of today’s game. He was identified at the time, removed from the ground and subsequently arrested.

“Brentford FC will continue to liaise with the Metropolitan Police, who will now investigate the incident.

“The club utterly condemns discrimination of any kind. It is abhorrent and has no place in society and we are determined to drive it out of Griffin Park.

“The most severe sanctions will be imposed on any individual convicted of discrimination and we will await the result of the Police investigation before commenting further.”

Rams manager Frank Lampard added: “Obviously Duane’s upset with the situation. It’s not what we want to see in life, not just in football.

“I can take a lot of banter. There was a lot of that today and I don’t mind that. I used to play down the road and I accept that, but some things obviously cross the line.”

Derby said in a statement that Holmes would “receive the club’s full support after being subjected to such abhorrent behaviour”.

They added the club “would like to place on record its thanks to the staff at Brentford and the Metropolitan Police for their speedy assistance in relation to the incident”.

Metropolitan Police confirmed in a tweet that a man was in custody and an investigation was ongoing.

Wigan’s Byrne posted a screenshot on his Twitter account of a sickening message he received following the Latics’ 2-2 draw with Bristol City at Ashton Gate.

In a statement, Wigan said: “Wigan Athletic Football Club are angered by racist abuse received on the personal Twitter account of one of our players, Nathan Byrne, on Saturday afternoon.

“We have reported the incident to the police and will work with the relevant authorities to assist them with their investigations.

“There is no place for discrimination in society and social media is not an exception to those rules. We find this behaviour abhorrent.”

Another week, another group of players racially abused.— Kick It Out (@kickitout) April 6, 2019

Kick It Out also released a statement on Twitter condemning the latest incidents.

It read: “Another week, another group of players racially abused.

“We won’t stop highlighting this disgraceful behaviour while it remains deeply ingrained within football. We’ll be liaising with the relevant authorities and offering support to clubs and players involved.”