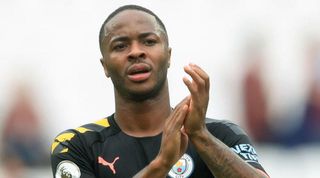 Jurgen Klopp's side finished a point behind Pep Guardiola's men last term, and currently hold a 22-point advantage over the defending champions.

But Sterling says City have not received enough respect for their recent achievements, citing Mohamed Salah and Virgil van Dijk's PFA Player of the Year triumphs in the last two campaigns.

"Especially in the last year where we have won the domestic quadruple including the league, to not have a player winning PFA Player of the Year kind of speaks for itself really," the England international told AS.

"The award was given to a Liverpool player [Virgil van Dijk] who had a fantastic season but I look at previous seasons as well when Yaya Toure scored 20 goals from midfield and he didn't win Player of the Year.

"Also, Sergio Aguero has been at the club for more than seven years and has scored unbelievable goals during this time, yet none of City's players have won it.

"It is impossible to win the league four times and none of the players were Player of the Year.

"So, this year Liverpool win the league and a Liverpool player will win the Player of the Year for sure. We won the league four times and we were not treated with the same respect.

"The first year we won the league [under Guardiola], Kevin De Bruyne was unbelievable and they gave it to another player [Salah].

"Every year we win a major trophy and it's given to an opposition player. It's that sort of thing that doesn't depend on us, but we keep going."

City will close the gap to Liverpool to 18 points with victory over Leicester on Saturday, with the Reds not in action until Monday's meeting with West Ham.