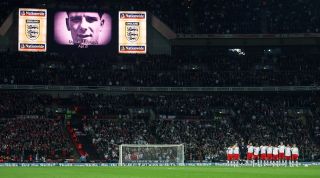 I visited his grave in late 2017. He’s buried in Dudley, where he grew up, and standing before him is a profoundly moving experience. Not in a good way. It isn’t enriching. In fact, it's very bleak. It’s not like visiting the eternal flame which burns in John Kennedy’s memory or sneaking into the grounds of Graceland. It’s just very sad; just a young man who was gone much too soon.

When Edwards died his father, Gladstone, took a job in that cemetery to be closer to his son. It’s difficult to think of something worse. Apparently, when well-wishers would drop in with their flowers, they’d ask him directions to his son’s plot, never knowing who he was. It's one of those stories that you can't forget.

People still pass through now. On that day back in 2017, with snow lining the streets and a cold rain spitting out from dark clouds, there were sodden Manchester United scarves draped across his grave and a small football, also worn by the elements, gently deflating in on itself.

It’s not an uplifting place, but it’s somewhere to consider what Edwards was and why he continues to exist in the way that he does. That’s partly because of people like Jim Cadman and his organisation, the Duncan Edwards Tribute. Jim’s vision is to keep Edwards relevant to the contemporary world and there’s an article about him and the work he does here, for The Blizzard.

The other reason, of course, is because there doesn’t seem to be much place in football for the imagination anymore. It’s a game of seriousness and analysis and vicious arguments over tiny differences in opinion. Unfortunately, that change has come at the expense of the quieter moments the game inspires – the daydreams, the wondering. It's the very space in which Edwards exists. In that bewitching twilight between fact and fiction.

The curiosity about him endures because of what he might have been in a literal sense – what he may have looked like holding the 1968 European Cup aloft or whether he, rather than Bobby Moore, would have collected the World Cup from the Queen in 1966. Or even what he would think of Manchester United now, if he were sat high in the stands at Old Trafford, alongside Sir Bobby Charlton.

But it’s also because Edwards comes from a time before modernity. Before television coverage, before YouTube and before any other consistent lens. The descriptions of him tend to be very lyrical, quite abstract, meaning that he’s a character without boundaries. Someone without limitations, even.

The story of his childhood, for instance, is a really a collection of biblical tales. They’re about his size and his strength and his amazing feats on a football pitch. In early 2019, a permanent exhibit of Edwards’ memorabilia was opened at the Copthorne Hotel in Dudley and I, courtesy of Jim, was fortunate enough to be invited to the ribbon-cutting ceremony.

Edwards’ cousin was there, Betty Cooksley, so too some of his teammates from schoolboy and county football. They’re very old men now, but their stories about him are still vivid and are spoken in the same reverence as the ones which appear in print. To hear them some of them told in person was a tremendous privilege and, I'm sure, will feel even more so in time.

His professional career, too, is recalled with wistfulness and wonder. When Edwards’ peers describe him, it’s with awe. And yet in the footage that does exist, in the short reels of British Pathé film that can still be found, the sport is unrecognisable and provides no kind of context.

That’s actually in his favour, I think. It means that his finer lines have to be drawn by the individual and his legend can be expanded into areas where, had he lived, it might not have gone. What was he? He's what you want him to be and that's probably why his legend is still so alive.

It’s why we think of Duncan Edwards today. What he might have been, but what he still is.

TIPS Who do FourFourTwo writers think will win the Champions League this season?

QUIZ Can you name every Champions League and European Cup-winning manager?