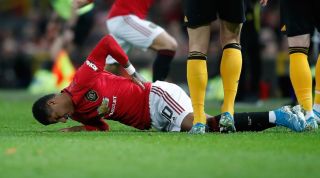 After years of managerial moaning, the Premier League finally ceded to years of calls for a European-style winter break this season. Well, sort of.

Forever protecting the sanctity of the New Year and Boxing Day games, the Premier League opted to have a two-week break where the clubs would get one of two possible weekends off, playing on the other to fulfil TV duties.

Now it's over – and, well, did you notice a break?

With Jurgen Klopp’s refusal to play the first-team in their FA Cup replay against Shrewsbury, and a host of England strikers - Marcus Rashford, Harry Kane, Tammy Abraham - getting injured at around the same time, the debate about whether to ease fixture congestion continues to rage.

Here, we look at the possible ways to cut fixture congestion – and whether any of us would actually want them to happen.

The Carabao Cup (or EFL Cup, or whatever you want to call it) routinely suffers from the PR nightmare of big clubs using it as an opportunity to rest their best players.

Wedged in-between the early Premier League rounds and the Champions League group stages, can you really blame them?

The League Cup has given us plenty of fun moments over the years - last year’s final, for example, gave us the gift of Kepa-gate - but it lacks the reputation or the magic of the FA Cup, and when big clubs don’t take it seriously, it’s hard for the fans to take it seriously.

The argument against it would be that it provides mid-table teams with an opportunity to win silverware. Although perhaps not as much as you would think. Since 2005, only two teams outside the current big-six - Birmingham City and Swansea - have actually won it.

They could scrap it altogether, or follow the EFL Trophy’s lead and keep it open to Football League sides only while permitting Premier League clubs to enter an U23 team.

Verdict: In theory, it would work. But the question is: do people actually want to scratch the Carabao Cup or kick the Premier League teams out? It would cost the EFL teams potential revenue on offer if they draw the big boys, and would deny fans of Premier League the chance to win a trophy. If the big six want to cut their fixture list, they can always play the kids.

While the hallowed FA Cup will never be scrapped, it hasn’t been immune to criticism.

When the Premier League began, there were still FA Cup final replays, with the last taking place in 1993. However, replays in the latter rounds are gradually becoming extinct, now only taking place up until the fourth round.

Top sides are vehemently against them - as we were recently reminded by the absence of Jurgen Klopp and any Liverpool player over the age of 21 against Shrewsbury - but many say scrapping them completely would compromise the notorious “magic of the cup.”

No longer would we see lower league sides with their backs to the wall, trying to preserve a draw to earn a financially lucrative replay against one of the big boys. The troubles encountered by the Bury and Bolton have brought EFL finances to the fore of the national conversation, so should we really take it away?

According to those numbers, scrapping replays would lead to more cupsets, keeping the magic of the cup very much intact.

But how many games would actually go as a result? This doesn't feel a big enough solution to make much of a difference.

Verdict: This one seems inevitable, and Jurgen Klopp’s refusal to travel to Shrewsbury could be a damning omen. Ditching replays may reject tradition, but would do no serious harm to the FA’s cup appeal.

In practice, this is the simplest solution, but it would also be the hardest to implement.

Theoretically, if two weeks were added to the end of the season, the Premier League could take a winter break without a cluster of midweek fixtures.

However, it could potentially infringe on international tournaments, giving the moaners another excuse if England flop. It would also mean a shorter pre-season, which could not only impact lucrative pre-season tours, but also exacerbate the problem of player burnout that we’re trying to solve in the first place.

Verdict: A nice idea, but you can’t summon two extra weeks from thin air. It would be too complicated.

Another solution would be to change the format of the Champions League or FA Cup so that big teams play less.

The FA Cup would be simple - those playing in Europe that season would enter in the fourth round rather than the third. But this doesn't do much for players in the EFL, who play a similar number of games to Premier League teams in Europe.

The Champions League would be more problematic, but a possible way to do it would be to add another qualifying round so that the group stage consists of three teams, rather than four. However, it would likely bring a backlash from supporters of leagues less likely to have entrants into the group stages. It would also raise worries that this would be the next step on the way to the much-talked about European Super League.

Verdict: While the Champions League may be unrealistic (plus, who wants to shorten the group stage anyway?), the FA Cup may be likelier. People were furious when Manchester United pulled out in 2000 due to Club World Cup duties, but the game has since grown more demanding, and perhaps people would be more sympathetic.

Cut the number of teams in the Premier League

The German, Dutch and Portuguese leagues all have 18 teams, and the idea of the Premier League following suit has been floated before. The top division was trimmed from 22 clubs to 20 in 1995, so the number is hardly sacred, and it would trim four games from every sides' season.

But the move would involve a re-jig of the EFL leagues, who would have to work out what to do with an extra two teams.

Verdict: Very unlikely. This would need the consent of the majority of Premier League teams – and outside the very biggest, they are all already one bad managerial hire away from relegation. Who would vote to increase that risk?

FEATURE Inside Lazio’s ultras: on the ground with Italy's most notorious fans