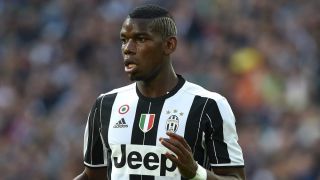 Mino Raiola does not "give a damn" if it costs Manchester United a world-record fee to prise Paul Pogba away from Juventus, insisting his only concern is getting the best deal for his client.

France international Pogba departed Old Trafford to join Juve on a free transfer in 2012 and has since developed into one the world's best players during his time in Turin, winning four straight Serie A titles with the club.

The 23-year-old is now being widely tipped to return to United to join Jose Mourinho's rebuilding job, with reports suggesting the fee will be in the region of £92million - with a further £18.4m going to his agent Raiola.

That would surpass the previous record fee Real Madrid forked out to land Gareth Bale from Tottenham, but Raiola says the price it will take to sign Pogba is not his concern.

"For me, I do not give a damn about record transactions," he said in an interview with Corriere dello Sport.

"The newspapers write that Pogba can set the record, but I've already made records with [Zlatan] Ibrahimovic and [Pavel] Nedved.

"I want the best for my players and therefore also for Pogba. There are certain things I only discuss with my clients and they know how things are."