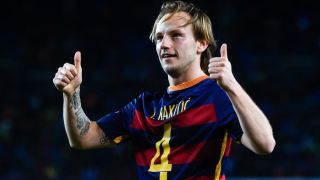 Croatia head coach Ante Cacic has moved to calm concerns that a calf injury could keep Ivan Rakitic out of the Clasico on April 2.

Rakitic underwent an MRI scan on the problem on Tuesday and the results have determined he will miss the friendly matches with Israel and Hungary.

The Croatian Football Federation did not confirm the severity of Rakitic's injury, leaving his availability for Barcelona's clash with Real Madrid at Camp Nou in doubt, but Cacic expects him to make a swift recovery.

"Rakitic will have further medical tests but our doctors are optimistic and he should return to normal work with Barcelona soon," he told a media conference.

"He will be fit for El Clasico, no doubt. It is minor injury, a partial calf rupture."

Rakitic's Barca team-mate Sergio Busquets also withdrew from international duty with Spain as a result of a hand injury with which he has been playing for the past month.