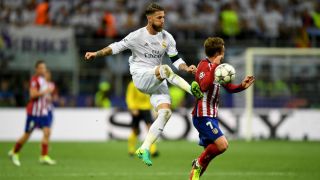 Sergio Ramos feels the current Real Madrid squad is one of the most complete in the club's history and has hailed the European champions' strength in depth ahead of the second leg of their semi-final tie against Atletico Madrid.

Players such as Alvaro Morata, James Rodriguez, Marco Asensio and Isco have not been regular starters this term, but have impressed whenever called upon and Ramos has paid triubute to the quality of Madrid's so-called second string.

"This might be one of the most complete squads we have had," Ramos said at a news conference ahead of Wednesday's short trip to the Vicente Calderon, which will hold its final Champions League encounter.

"We have had many of the best players in the world over the years and it is no different now.

"We are not just 11 players, we are 24, 25 who are always pushing, and those who play less do a great job, and we are benefitting from having those guys ready and able to step in."

has played in the last 11 Champions League semi-final matches!May 9, 2017

Madrid defend a handsome 3-0 lead from the first leg and Ramos is adamant they have no concerns ahead of the return.

"We are not feeling the pressure. We have things in our own hands," he added.

"We can win two trophies and we will do our best to do so. We will respect all our opponents as we always do.

"Wednesday, we will see who gets to the final and then we have LaLiga over the coming weeks too."