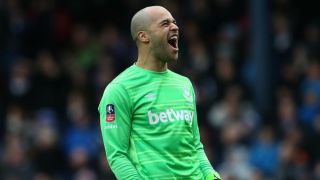 West Ham have tied goalkeeper Darren Randolph down to a new four-year deal.

The 29-year-old, largely an understudy to Adrian last season, featured for the Republic of Ireland at Euro 2016.

Randolph joined from Birmingham City last year and has been pleased with the progress he has made since, while he is also looking forward to the club's move to the Olympic Stadium.

"I've had a good first year at West Ham and this is another positive thing to happen to me at the end of a good first season and a good summer with Ireland," he told West Ham's official website.

"It has gone better than I could have ever expected at West Ham since I joined last summer, playing as many games as I did and then starting for Ireland in the play-off and at Euro 2016.

"Signing a new contract means I want to stay here for a long time and be part of what is going on with the club, moving into a new stadium and a new training ground – it's all very positive and exciting."