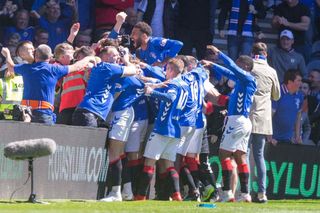 Steven Gerrard’s Rangers set down a marker ahead of Celtic’s attempt to win their ninth straight title next year as they triumphed 2-0 in the final Old Firm clash of the campaign.

Neil Lennon’s men arrived at Ibrox a week on from wrapping up their eighth title in a row but trudged away after allowing the Light Blues to square up this term’s derby head-to-head at two wins apiece.

The Parkhead triple treble chasers looked like they had their minds elsewhere and paid the price when Scott Arfield wrapped up the win midway through the second half.

The victory – which cuts Celtic’s lead to six points – counts for little in the larger scheme of things but will renew belief among the blue half of Glasgow that they can finally halt their bitter rivals’ era of domination after the summer.

Wes Foderingham lining up in goal was a reminder of the disciplinary problems that have plagued Gers this season.

Allan McGregor’s red card against Hibernian last week was the hosts’ 12th of the campaign and Gerrard was once again forced to reiterate to his players in the days leading up to the game the importance of keeping referee Kevin Clancy onside.

The change in goal was Rangers only alteration but Neil Lennon made three from the side which clinched title number 50 at Pittodrie as he decided to take no chances on the fitness of Kieran Tierney and James Forrest ahead of the Scottish Cup final.

With Timothy Weah now departed, that made space for Jonny Hayes, Oliver Burke and Michael Johnston.

As expected, there was no guard of honour from Gerrard’s team for the champions – but there were delirious celebrations from the home support as Rangers struck inside two minutes.

Tavernier was handed a free-kick opening after Ryan Kent was tripped by Johnston on the edge of Celtic’s box. The Ibrox captain was looking to pick out a colleague but when a touch failed to come, Scott Bain was caught flat-footed watched with anguish as the ball flew in at his back post.

Ibrox erupted in joy and the fevered atmosphere only encouraged Rangers to run quicker and press harder.

Jermain Defoe, however, was fortunate not to be booked when he went down with a flamboyant tumble as he and Kristoffer Ajer chased an Arfield knock-down.

It took Celtic 18 minutes to catch their breath but Burke could only fire over as a messy contest continued to frustrate Lennon on the touchline.

The Hoops established a foothold as the match ticked towards the break but it was an out-of-sorts display from the champions. Ajer and Jozo Simunovic took their time getting play going, Scott Brown was left griping to Clancy as Arfield bit at his ankles while Callum McGregor wasted a good free-kick chance by knocking it out of the park.

Jon Flanagan was the first player to have his name taken after barging Brown over before a corner delivery. Given Gerrard’s earlier warning on discipline it was a hugely unnecessary risk to take.

Lennon looked far happier with his side’s approach following the restart as Gers were made to sit back.

But Gerrard’s team responded by upping their tempo and struck again on 65 minutes.

Glen Kamara took Brown out of the game with sublime drop of the shoulder then marched on. Defoe dummied his pass and the Hoops defence were caught cold as Arfield raced past the statuesque Ajer to prod home the second.

Again Ibrox erupted as a couple of dozen jubilant Rangers fans spilled on to the pitch to celebrate with the goalscorer, who was booked as punishment.

Number three should have arrived on 77 minutes as Kent released Defoe. Bain stood up to block his first attempt then watched with relief as he lobbed the rebound against the bar.

Odsonne Edouard skipped past Nikola Katic with seven minutes left but there was no lifeline for the Hoops as Burke’s finish was easily stopped by Foderingham.