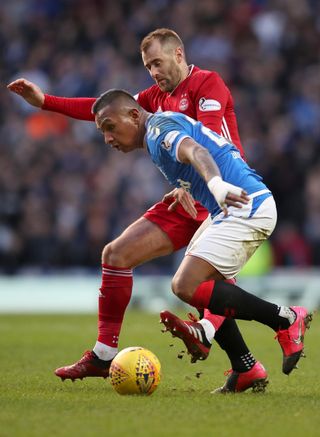 Rangers dropped more points in the Ladbrokes Premiership title race after being held to a goalless draw by Aberdeen at Ibrox.

Another below-par display cost Steven Gerrard’s side as they made it five points lost inside a week following their defeat by Hearts last weekend.

Rangers created some decent chances either side of the break, but Aberdeen goalkeeper Joe Lewis was equal to everything they could muster.

And the Dons had a number of opportunities themselves. Sam Cosgrove’s touch let him down when clean through in the first half and Allan McGregor produced an excellent stop from Ash Taylor in the final quarter.

With both sides having played 23 games, Rangers are now four points behind leaders Celtic, who face Hamilton on Sunday.

Gerrard handed Alfredo Morelos his first start of the year following suspension and a calf niggle, after Jermain Defoe was ruled out for about five weeks with a calf injury suffered in a 2-0 midweek win over Ross County.

Aberdeen lost 5-0 at Ibrox earlier this season but they started the livelier side. Niall McGinn created a great early chance after turning away from Borna Barisic and crossing to the edge of the six-yard box but Cosgrove could not connect.

Lewis Ferguson had a header tipped on to the bar after McGinn’s free-kick and Matty Kennedy curled over from 20 yards as the visitors continued to keep Rangers at bay.

The home side’s first spell of pressure came just before the half-hour mark after Scott McKenna and then Shay Logan lost possession in their own half but Rangers could not test Lewis.

Niko Katic almost gifted the visitors an opener when he dallied in possession on the halfway line and was robbed by Cosgrove. The Dons striker streaked clear but took a heavy touch as he approached the penalty area and allowed McGregor to smother.

Rangers stepped up a gear. Lewis pushed wide a long-range strike from Steven Davis and spilled a speculative Morelos effort before gathering. The Aberdeen goalkeeper pulled off an excellent stop from Scott Arfield’s near-post header following a Davis corner.

Rangers continued to press after the interval and Goldson’s long ball sent Morelos away. The striker took the ball down well but Lewis came off his line to divert his shot over.

Aberdeen were blocking shots and defending their box well and they suddenly re-emerged as an attacking force. Taylor and substitute Jon Gallagher threatened from long range before Cosgrove set up the latter on the edge of the box. The Irishman’s strike was unconvincing and McGregor parried.

The Rangers goalkeeper soon made a better save when he stopped Taylor’s close-range header following McGinn’s inswinging free-kick.

Rangers brought on deadline-day signings Ianis Hagi and Florian Kamberi in the latter stages but could not fashion a clear chance.