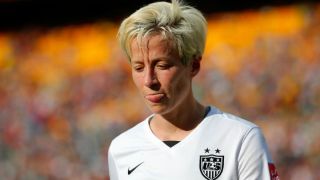 On Thursday, before a friendly against Thailand, the midfielder decided again to drop to one knee for the playing of the anthem, with this time being the first while wearing an American uniform.

Rapinoe had carried out the demonstration while playing for her club team, the Seattle Reign, as a show of solidarity with NFL quarterback Colin Kaepernick and his protest against police treatment of black Americans.

But she admitted to ESPN earlier this week doing so while representing USA is "different than the club".

Still, Rapinoe, who has been steadfast in her desire to further the nationwide conversation Kaepernick, said she believed protesting on the international stage would be “more meaningful” than any other message she could send.

"I'm still working through that a little bit. I've gone back and forth with a number of different things," she told ESPN.