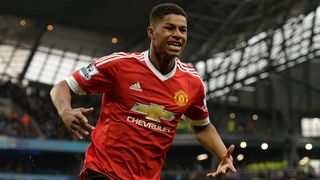 Rashford made his United debut in the 5-1 Europa League win over Midtjylland back in February, scoring twice in 12 minutes to complete a comfortable victory.

He has since gone on to score five goals in eight appearances in all competitions, including the winner in United's 1-0 win over Manchester City at the weekend and Smalling has nothing but praise for his 18-year-old team-mate.

"You can see he's always on the defender's shoulder and I think if I was up against him, he's one who would certainly put fear in you," Smalling told MUTV.

"He's done it in the previous games as well, so it's great for him and great for us.

"It's so refreshing to see a young kid who wants to run and keep running. You could see he cramped up [at the end of the game against City], but that didn't stop him.