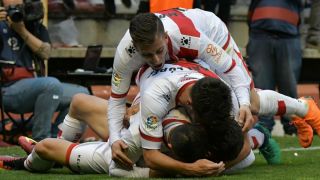 Rayo Vallecano have been promoted to La Liga following a 1-0 win at home to Lugo on Sunday.

Alex Moreno's strike five minutes before half-time was enough to seal all three points for Rayo and a return to Spain's top flight, two years on from their relegation.

Third-place Sporting Gijon were 2-1 winners over Granada but now cannot catch the top two of Rayo and Huesca with just one round of matches left to play.

A pitch invasion greeted the final whistle at Campo de Futbol de Vallecas, as Michel's side celebrated promotion just a year on from a 12th-place finish in a difficult first season back in the second tier.

Rayo could yet win the La Liga 123 title, having moved a point clear of Huesca, who were beaten 1-0 at home by Gimnastic de Tarragona just six days after winning promotion with their own defeat of Lugo.