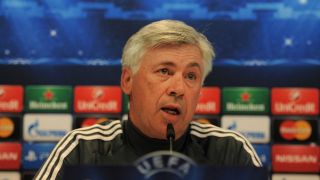 Bale and Modric both pulled up with injuries in Saturday's 3-1 win over Malaga and will miss the return leg of the quarter-final tie.

Benzema missed that victory after hurting a knee in the goalless first leg against Atletico and is also sidelined for the midweek game at the Santiago Bernabeu.

Ancelotti is yet to decide who will replace the trio as Real target a first win over their local rivals since last season's Champions League final - a run that was stretched to seven games after last week's stalemate.

"We have solutions. I'm going to play the players who have confidence and are well physically," Ancelotti said.

"We have to live with the injuries that we have here. Over the last few months we've had players missing.

"We've coped without big players and that won't affect our confidence. Those who are going to play will give everything.

"We don't have some important players but that doesn't change what we have to do on the pitch.

"We have to try replicate our game in the first leg."

Asier Illarramendi has been mooted as a potential midfield replacement for Modric with question marks remaining over who will come in for Benzema and Bale alongside Cristiano Ronaldo up front.

"I still haven't spoken to the players who will be in the XI. I'll speak to them tomorrow as that's the right thing to do," Ancelotti added.

"I have the best squad in the world so it's important to be focused on those who play.

"I have confidence in my players.

"Without Bale and Benzema we have options, it could be Chicharito or it could Jese [Rodriguez] or with James [Rodriguez]."