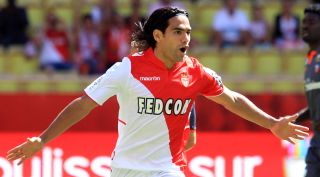 The Colombia international joined the Ligue 1 leaders for an undisclosed fee from Real's city rivals Atletico Madrid in May, putting pen-to-paper on a five-year deal.

Falcao has started the season in terrific form, notching seven goals in nine appearances for Claudio Ranieri's side.

And reports have surfaced that Falcao could be set for an immediate return to the Spanish capital, with suggestions a move to the Bernabeu could happen as early as the January transfer window.

However, Perez has denied a deal will be done mid-season, but admitted he would be interested in signing the forward at the end of the campaign.

Speaking to Punto Pelota, he said: "We will not come in January but, in June, who knows?

"Nothing is impossible, and even then there is a lot (of time left).

"Falcao is a great player and I know he would want to play in Madrid. I know that but this is quite normal."

Perez also slammed reports in the Spanish media that world-record signing Gareth Bale had suffered a slipped disc, saying the 23-year-old could even be involved in Saturday's fixture with Malaga at the Bernabeu after his thigh injury.

He added: "It was cruel to publish what has been published about Bale.

"A protrusion is very normal in athletes. This (story) has been published intentionally and we are investigating to find out what happened.

"I'm shocked. It's hard to understand a story with such cruelty, especially when it is not true.

"The player is calm, and is hoping to play on Saturday. Madrid's medical services have done a spectacular job."