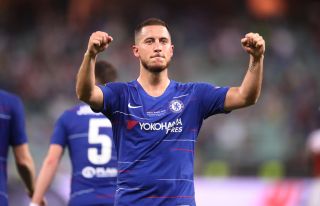 Eden Hazard has finally realised his “childhood dream” of playing for Real Madrid, signing a five-year contract with the Spanish giants.

Madrid struck a deal with Chelsea that is understood could rise to a club-record fee of £150million, once all bonus payments come into play.

The flat fee will hit £100m, with Chelsea happy to allow Hazard to make his big move for that price given he had just one year left on his Stamford Bridge deal.

Hazard grew up with posters of Zinedine Zidane on his bedroom wall, and now the 28-year-old will work under the Madrid boss.

“Although it is with sadness we say goodbye to Eden and we made it absolutely clear to him the club wished him to stay, we respect the decision he has made to take on a new challenge in a different country and follow his childhood dream of playing for Real Madrid,” said Chelsea director Marina Granovskaia.

“The memories he leaves us with will not fade. He provided all who watched Chelsea play with great entertainment and many match-winning contributions, and for that we thank Eden enormously.

“He has been a model professional throughout his time at the club, a wonderful individual to have around and a joy to work with.

“We look forward to welcoming him back to Stamford Bridge in the future.”

Hazard will double his wages to £400,000 in a five-year deal at Madrid, becoming the club’s second major signing of the summer after Frankfurt striker Luka Jovic.

Real will now look to prise Christian Eriksen away from Tottenham, though Spurs will fight tooth and nail to retain their Denmark playmaker.

“Real Madrid and Chelsea have agreed to the transfer of the player Eden Hazard,” read Madrid’s statement. “The player remains linked to the club during the next five seasons, until June 30, 2024.

“Eden Hazard will be presented as a new player of Real Madrid on Thursday, June 13 at the Santiago Bernabeu stadium, after passing the relevant medical examination.”

Hazard joined Chelsea from Lille in 2012, and went on to win two Premier League titles, one FA Cup and one League Cup – and two Europa League crowns.

The Belgium talisman leaves having fired 110 goals in 352 appearances at Chelsea – and above all with the full blessing of the club’s hierarchy that he so wanted before departing.

Hazard signed off in perfect style, spearheading the 4-1 Europa League final triumph over Arsenal in Baku, scoring twice and assisting another.

“I think it’s a goodbye,” said Hazard in Baku. “My dream was to play in the Premier League, I did it for seven years. Maybe it’s time for a new challenge.”

Chelsea did everything in their power to tempt Hazard into staying at Stamford Bridge, but the Blues could not combat the lure of Madrid.

Childhood friend and Belgium team-mate Christian Benteke revealed this week that Hazard told him when he was 12 that his chief ambition was to play for Real. And now the mercurial playmaker has seen that wish come true.

Chelsea will now hope for success in their appeal to the Court for Arbitration for Sport (CAS) against their two-window FIFA transfer ban.

Manager Maurizio Sarri’s move to Juventus is expected to be wrapped up shortly, with Chelsea holding out for £5m in compensation.

The Stamford Bridge hierarchy want their eventual new manager to arrive with the potential to make new recruits, with Barcelona’s Philippe Coutinho a possible target as Hazard’s replacement.

Homegrown forward Callum Hudson-Odoi will play a more pivotal role once fit after Achilles tendon surgery, though the 18-year-old remains locked in talks with Chelsea over a new long-term contract.