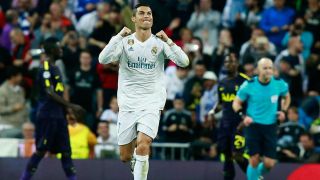 Tottenham held Real Madrid to a 1-1 draw at the Santiago Bernabeu in an enthralling encounter between the top two of Champions League Group H.

Cristiano Ronaldo cancelled out Raphael Varane's own goal in the first half in the Spanish capital, but the holders could not find a way past the inspired Spurs keeper Hugo Lloris in their pursuit of a second.

Both these teams had won their opening two group games and suitably delivered a match of high quality on Tuesday, in which both goalkeepers were forced into some stunning saves to keep the scores level.

It was Spurs who struck first, with Varane inadvertently turning Serge Aurier's cross into his own net, before Ronaldo drew Madrid level with his fifth Champions League goal of the season.

Madrid enjoyed more possession and the better of the chances but Lloris was in inspired form, producing athletic stops to deny Karim Benzema and Ronaldo and earn his side a share of the spoils, while it required a brilliant save from Keylor Navas to prevent Harry Kane snatching the win for Tottenham.

The result means the teams are level on seven points and identical goal difference ahead of the return fixture at Wembley on November 1.

Spurs lined up with Fernando Llorente alongside Kane in attack and a five-man defence, but the reinforced back line was exposed inside the first five minutes as Ronaldo rattled the post with a header before Karim Benzema side-footed wide on the rebound.

Spurs grew in confidence as they settled into proceedings, with fit-again Navas making a fine reaction save to deny Kane, and the Bernabeu was silenced in the 28th minute thanks to a clinical counter-attack.

Aurier raced into space down the right and sent a low cross towards Kane, and although the England striker missed his attempted backheel, the ball clipped Varane and looped beyond Navas.

Isco and Marcelo were each denied by good near-post saves from Lloris as Madrid pushed for a leveller before the break and they managed just that with two minutes of the half to play, Ronaldo blasting home from the penalty spot after Aurier had brought down Toni Kroos at the end of a flowing move.

Benzema should have put Madrid ahead nine minutes after the restart but Lloris somehow kept out his header from point-blank range with an outstretched foot, and he made a flying stop to tip a Ronaldo half-volley over the bar as the home side kept up the pressure.

Navas was called upon to stop Spurs snatching the win with two spectacular saves, though. He dived low to his left to tip Kane's effort around the post after the striker was played clean through, before getting fingertips to a fierce Christian Eriksen strike.

Madrid piled on some late pressure but could not find a way through a diligent Spurs defence – for whom Danny Rose made a late appearance for his first outing since January – as Mauricio Pochettino celebrated an important point upon his return to Spain.