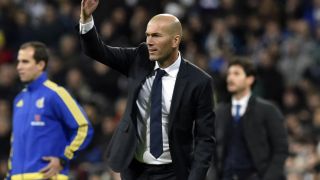 Real Madrid director general Jose Angel Sanchez believes the inclusion of coach Zinedine Zidane's children on a list of players improperly signed by the club highlights the absurd nature of their transfer ban imposed by FIFA.

Both Real Madrid and Atletico Madrid were handed transfer bans by football's governing body on Thursday for breaches "relating to the international transfer and registration of players under the age of 18".

Real and Atletico will be banned from registering new squad members for the next two transfer windows, meaning any players they do sign will be ineligible to play until the 2017/18 season.

The two clubs have confirmed their intention to appeal and Sanchez said: "The sanction is so absurd and leads to such erroneous statements, such as the sanction for the children of Zidane or the brother of [Ezequiel] Garay.

"This club has never worked with the family to uproot underage players. This club has values and an ethical code.

"The various people in charge at the club have never broken that code. It has never happened.

"I assure you that the rest of these cases for which the club has been punished are exactly the same. The pattern is the same and the family circumstances the same.

"The club is confident the appeal will succeed, even at FIFA. [The ban] was unexpected.

"We'll do whatever we have to do. We just hope justice prevails and there are no consequences for the club. Hopefully it doesn't get to [the Court of Arbitration for Sport] but we’ll take it there if necessary.

"Our intention is to exhaust the sporting options."