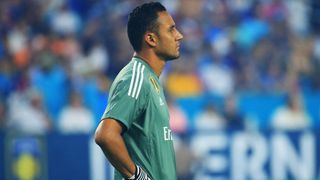 The 30-year-old missed the 2-1 LaLiga win over Getafe last weekend but returned for the midweek Champions League clash with Tottenham, making a crucial save from Harry Kane in the 1-1 draw at the Santiago Bernabeu.

Madrid released a statement on Friday confirming he has a thigh problem but would not specify how long he is expected to be sidelined.

However, reports in Spain suggest he could be out of action for up to two weeks, making him a doubt for the return fixture against Spurs at Wembley on November 1.

Navas will also likely miss the Copa del Rey trip to Fuenlabrada and the league visit to Girona, as well as this Sunday's home game against Eibar.