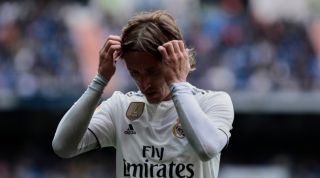 The 2018 Ballon d’Or winner has featured regularly in a season of underachievement for the Spanish giants that has seen them slump to third in La Liga and be eliminated by Ajax at the Champions League last 16.

Now AS reports that Zidane is having doubts about the Croatian international’s future at the club after being unimpressed by his performances.

The Frenchman is expected to oversee a summer overhaul at the Bernabeu and his team’s poor end to the season is said to have encouraged him to reassess who will be sacrificed.

Zidane is understood to harbour concerns that the 33-year-old playmaker is past his best and won’t be capable of returning to the level that saw him guide Croatia to the World Cup final next season.

Furthermore, Real appear to have a ready-made replacement set to come in after reaching an agreement for the signing of Tottenham Hotspur midfielder Christian Eriksen.

The club hierarchy want Modric to stay in the capital but wouldn’t stand in his way of a departure if a club were to make an offer, while the player doesn’t want to leave despite considering an approach from Inter Milan last summer.