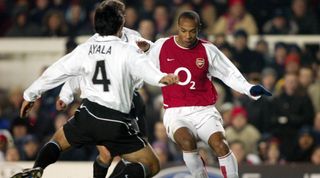 Unai Emery’s Gunners have stumbled in the last 10 days against Crystal Palace, Wolves and Leicester, while Los Ches have slipped to consecutive defeats against Atletico Madrid and Eibar. Having appeared to be in a strong position to qualify for next year’s Champions League a fortnight ago, both Valencia (stuck in sixth place) and Arsenal (stumbling back into fifth) now find themselves watching traditional rivals pull away. These two skittish teams appear well matched.

Unless either club – both backed by huge, expectant fan bases – is able to win this year’s competition, thereby affording them a seat at football’s top table next campaign, a Europa League berth appears the more likely outcome for both in 2019/20. If Emery is to emulate the success he enjoyed at Sevilla in his first season, when he won the first of three Europa Leagues in 2014, Arsenal will also need to buck the Gunners’ historical trend of poor results against the Spanish club.

Di Stefano and the shoot-out

Arsenal were unable to exploit the Valencia defence’s lack of pace. “We had nothing more to give,” recalled David O’Leary. “The creativity had gone.”

It was a symbolic defeat which heralded the beginning of the end for Arsenal's ‘London Irish’ era, as midfield talisman Liam Brady left for Juventus during the close season. Arsenal wouldn’t reach another European final for another 14 years.

In April 2001, the two sides clashed in the Champions League quarter-finals. Both legs were high-octane affairs.

“We defended well, but sat back too much and lacked the determination to hit them on the counter-attack,” recalled former midfielder Patrick Vieira. Giant Norwegian striker John Carew soared to head Valencia’s goal on 75 minutes, and as Vieira reflected: “They locked us out. They were very disciplined. We gave no response.”

History repeated itself two years later, when a brace of Carew goals sent the Gunners scuttling out of the Champions League in March 2003, at the climax of the second group stage.

“Our game management was never quite right on the big European occasion,” said former Midfielder Gilberto. “We were never able to dictate the pace of play, or vary our tactics in a way that opponents like Valencia did. European football is a game of chess, and under Arsene, we never quite mastered it.”

Sixteen years later, and neither Arsenal – who remained undefeated on course to winning the league in 2004 – or Valencia (who won two La Liga titles in 2002 and 2004) are the formidable outfits they were in their early-noughties heyday. Both clubs have been pushed to the periphery by big-spending rivals.

At the Emirates Stadium, Arsenal must press their home advantage in the same manner they did against Tottenham, Chelsea, and Napoli (in the first half of the quarter-final first leg). Only a minimum two-goal advantage, and a clean sheet, will give their players and supporters genuine confidence for the second leg.

In Spain, they will need to be ultra-disciplined (just as they were when they held out against Napoli a fortnight ago) while seeking to hit their hosts with a lightning counter-attack or two. Given the Gunners’ propensity to deliver poor performances on the road, that won’t be easy.

Before the 2016 Europa League Final, in which Sevilla defeated Liverpool, Emery insisted: “In key moments, my players never fail.” But the current Arsenal crop do not inspire anywhere near that level of confidence.

But Valencia are far from invincible, and at Sevilla, Emery demonstrated that if any coach was able to navigate his way through the travails of a Europa League campaign against the backdrop of a stuttering league season, it’s him.

If the Gunners are able to win their semi-final, not only will Emery end Arsenal’s current poor run of form, but he will also demonstrate his tactical acumen and flexible approach on the big occasions in Europe once more. It would also give him a real opportunity to kick-start a new era in N5 by winning a trophy, and provide the club with a new European identity in a way his predecessor never could.

But first, Arsenal need to remove that Valencia millstone from around their neck.