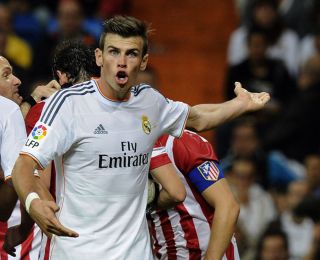 Stories emerging from Spain on Saturday had suggested that Bale - who became the world's most expensive player when he joined Real from Tottenham in a reported £85million deal in September - could be facing a lengthy spell on the sidelines after suffering a problem with his L5-S1 vertebrae.

However, the club have refuted those claims, insisting that Bale is merely suffering from a more common "small chronic disc bulge".

A statement on the club's official website read: "The information published, claiming that the player has a slipped disc on the L5-S1 vertebrae and a bulge on two others, is completely false.

"The player does not have a slipped disc, as the club's medical services stated clearly to the newspaper before the information was published. Surprisingly, the version the doctors offered this media outlet on Thursday 10 October has been omitted.

"The player Gareth Bale has a small chronic disc bulge, which is extremely common among football players and by no means prevents him from carrying out his professional activity normally."

The Welshman has been suffering with a thigh problem that has restricted him to just one start for Real since making his world record switch, in a 2-2 draw with Villarreal on September 14.

He subsequently appeared as a substitute in the 6-1 victory over Galatasaray in the UEFA Champions League, as well as coming off the bench in the 1-0 La Liga defeat to rivals Atletico.

The 24-year-old moved to the Spanish capital after months of speculation throughout the transfer window and made an instant impact after notching on his debut in the Liga fixture with Villarreal.

Carlo Ancelotti's side went into the international break third in the table after eight games, five points adrift of leaders Barcelona and Atletico.