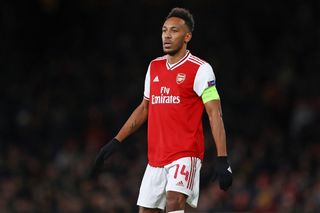 Even in a disappointing season for Arsenal, Pierre-Emerick Aubameyang has maintained his composure, continuing to deliver goals on a regular basis.

His tally of 20 in all competitions, despite often playing on the left of a front three, has encouraged plenty of Europe’s elite to weigh up offers for him.

Real Madrid are amongst Aubameyang’s many suitors, with the Express reporting that the club’s manager, Zinedine Zidane, has informed the Arsenal man of where he stands on their wish list.

Borussia Dortmund’s Erling Braut Haaland and Liverpool’s Sadio Mane are Real’s preferred targets, with Aubameyang acting as a fall-back option in the event that neither of them can be prised away from their current clubs.

Haaland has been a revelation this season, breaking multiple scoring records for Red Bull Salzburg and then Dortmund, who he joined shortly before the January transfer window.

Mane, himself a former Salzburg player, has been remarkably consistent during his four years at Anfield, and has arguably overtaken Mohamed Salah as Liverpool’s most important attacker.

Zidane’s desire for a new goalscoring threat stems from Luka Jovic’s struggles in his first season at the Bernanbeu. Signed from Eintracht Frankfurt for €60 million last summer, he has just two goals from 24 appearances.

Real’s hunt for the right striker will continue over the coming months, but for now Aubameyang remains on the back burner.

The 30-year-old Gabon international joined Arsenal from Dortmund back in January 2018, as the final signing of Arsene Wenger’s reign.

He has scored 61 goals in 96 games for the club, quickly becoming a firm fan’s favourite during a difficult period for Arsenal.

Timeline: How Jose and Pep lost the love and became best of enemies

Quiz! Can you name every signing Pep Guardiola and Jose Mourinho made at Barcelona and Real Madrid?