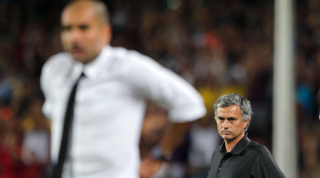 NOW TRY Quiz! Can you name the last 100 penalty scorers in the Premier League?

Long before they were the faces of Manchester City and Tottenham Hotspur respectively, Pep Guardiola and Jose Mourinho were the minds behind the two biggest powerhouses of European football.

It was more than a rivalry, it was a divide. The two biggest teams in Spain, two vastly different philosophies and the pick of the world's best players in an era where the Premier League didn't scoop them up.

And boy did they pick some of the world's greatest footballers.

In celebration of our watchalong special tomorrow - Barca's famous 5-0 drubbing of their bitter enemies - we'd like you to name every player Pep and Jose brought to Spain in their time managing over there.

While you’re here, why not take advantage of our brilliant new subscribers’ offer? Get 5 copies of the world's greatest football magazine for just £5 – the game’s greatest stories and finest journalism direct to your door for less than the cost of a London pint. Cheers!

COMMENT Do you remember the first time? Why actual football is so rarely what makes us fall in love with the game