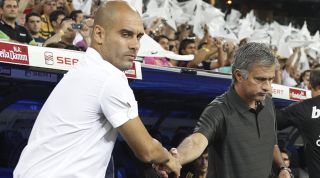 Yes, they used to be friends.

In 1996, Jose Mourinho arrives at Barcelona as the translator (and general factotum) of Bobby Robson, tasked with providing a bridge between his boss and the squad. He soon identifies Guardiola as one of the leaders worth knowing. “They were quite friendly,” Robson said. Guardiola: “It was a working relationship.”

So it continues even after Robson leaves, with Mourinho staying on under Louis van Gaal until 2000. When celebrating one title, Mourinho shouts: “Today and forever, Barça in my heart!”

The pair are impressed, yet wary of the conflict Mourinho might create. They opt for Guardiola, whose only achievement is to have led Barça B to promotion from the fourth division. That rejection has, by many, been portrayed as the backdrop for Mourinho’s resentment of the club.

In their second season under Mourinho, Inter Milan face holders Barça in the Champions League semi-finals. Having won six trophies in their first year under Guardiola, the Catalans are favourites, but then an eruption of the volcano Eyjafjallajokull shuts down the European airspace. Barça travel to Milan by bus and lose 3-1.

Back in Barcelona, Inter midfielder Thiago Motta gets dismissed in the first half, at which point Mourinho tells Guardiola: “Don’t think you’ve won yet.”

With herculean grit and catenaccio-style tactics, Inter scrape through, prompting Mourinho to sprint onto the pitch, index finger raised, shushing the crowd. In his office at Real Madrid, Mourinho later installed a life-size cardboard cut-out of himself in his moment of triumph.

Ranked! Man United and Man City stars, based on performances in 2017/18

How Manchester United can beat Manchester City – even without Paul Pogba

A year after Madrid have hired Mourinho to stop Guardiola by any means necessary, four Clásicos in 18 days ratchet up tensions. After the Copa del Rey final, won 1-0 by Madrid, Guardiola rues a correct offside call: “A two-centimetre decision from a linesman who must have had a very good view ruled out Pedro’s goal.”

Mourinho used that to ridicule Guardiola for criticising referees when they are right. That makes Guardiola snap. In the press room ahead of their Champions League semi-final, Guardiola looks into the cameras, asks which one is Mourinho’s, then addresses him directly. “In this room, Mourinho is the f***ing chief, the f***ing boss. I don’t want to compete with him in here... but this is a game of football.”

When Guardiola returns to the team hotel, the players give him a standing ovation.

In the ensuing clash, Barça win a toxic game 2-0, with Pepe dismissed and Mourinho sent to the stands. Mourinho then gives an extraordinary press conference in which he accuses UEFA’s referees of favouring Barça, and devalues Guardiola’s achievements.

“Deep down, if they are good people, it cannot taste right for them,” he says. “I hope that one day Guardiola has the chance of winning a brilliant, clean championship with no scandal.”

The following August, the clubs lock horns in the Spanish Super Cup. Another feisty duel has entered stoppage time when Marcelo hurls himself towards Cesc Fabregas right in front of the dugouts. In the inevitable brawl, the red cards are flying, while Mourinho jabs a finger into the eye of Tito Vilanova, Guardiola’s assistant.

Though the gesture is condemned, Madrid’s fans cheer Mourinho’s name at the Santiago Bernabeu days later. A banner reads: “Mou, your finger shows us the way.” A spokesman for Mourinho says: “Jose will not ask for forgiveness. He firmly believes he was defending the interests of Real Madrid.”

A year after leaving Barça, exhausted and sick of Mourinho, Guardiola joins Bayern Munich – and promptly meets him again. Ahead of their duel in the UEFA Super Cup, Mourinho says he doubts whether Bayern have gotten better under their new coach.

Bayern beat Chelsea on penalties, and Ramires gets sent off for a challenge that sidelines Mario Gotze for weeks. “Every time I play Pep I end up with 10 men,” Mourinho says. “It must be some sort of UEFA rule.”

In a widely reported exchange from the annual UEFA forum for leading coaches, Mourinho and Guardiola argue about the right length of the grass. Guardiola wants it no longer than 1.5cm so that it speeds up play, but Mourinho disagrees.

Mourinho: “Everyone has his style of play, which should be respected. Football can be spectacular in several ways.”

Guardiola: “The beauty of football depends on the coach. It seems to me that Mourinho prefers the result to the spectacle.”

At a later stage, Mourinho reportedly said: “When you enjoy what you do, you don’t lose your hair, and Guardiola is bald. He doesn’t enjoy football.”

Though their teams haven’t met in nearly two years, Mourinho knows Guardiola has won two straight league titles with Bayern, who have been clear favourites.

Basking in his own title win at Chelsea, Mourinho says: “I’m not the smartest guy to choose countries and clubs. I could choose another club in another country where it is easier to become champion. Maybe I will go to a country where a kit man can be coach and win the title.”

The pair take charge of the two Manchester clubs at the same time, but their rivalry falls flat in the first year. Mourinho says it doesn’t make sense to try to destabilise Guardiola in the Premier League, because then the other four title rivals might race ahead.

In 2017, Antonio Conte's Chelsea lift the trophy; the following year, Manchester City win the Premier League easily, with Mourinho's United 19 points behind in 2nd. A year after that, City clinch a second consecutive title, but United fall away to reveal a new rival to City – and Guardiola...