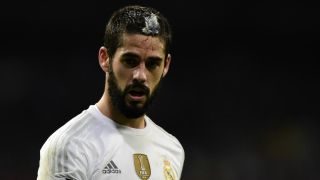 Real Madrid have announced Isco is facing a spell on the sidelines after picking up an ankle injury.

Tests have confirmed the 24-year-old has damaged a ligament, with head coach Zinedine Zidane revealing he twisted his right ankle during training this week.

"Following tests carried out today on Isco at the Sanitas La Moraleja University Hospital, he has been diagnosed with a sprain of the talofibular ligament in his right ankle. His progress will continue to be monitored," a club statement confirmed.

Spain head coach Julen Lopetegui opted to leave the midfielder out of his squad to face Belgium and Liechtenstein next month as a result of the injury.

Isco is set to miss Saturday's clash with Celta Vigo, but it is hoped he will be fit for the game against Osasuna at the Santiago Bernabeu on September 10, after the international break.

The former Malaga man has been linked to a move away from Madrid during the transfer window, with Juventus among the clubs reportedly interested.