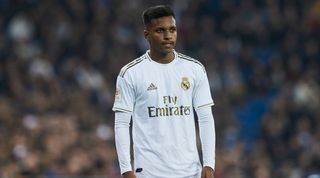 Real Madrid will not be able to call upon Rodrygo for Sunday's El Clasico with Barcelona after the forward was sent off playing for Castilla.

The Brazilian was in line for a recall to Zinedine Zidane's first team with Eden Hazard injured with a broken ankle, reports Goal. Yet Rodrygo is now suspended after picking up a bizarre red card playing for the B side.

The 19-year-old scored a final solo goal in their 2-0 win over SS Reyes, but was then given a second yellow card for goading the goalkeeper.

With Hazard expected to be sidelined for three to four months, Zidane had personally reassured Rodrygo he was part of his plans - having not been included in the match day squad for the last three La Liga games.

Yet now the youngster will not be able to feature against Barca, although will still be eligible to play Manchester City in the Champions League last 16 first leg on Wednesday.

Madrid were surprisingly beaten 1-0 by Levante at the weekend in the same game as Hazard suffered his injury. The result allowed Barca to move ahead of them to the top of the table following their 5-0 victory over Eibar.

Aside from its history, this also makes El Clasico a hugely important fixture in the title race as well.