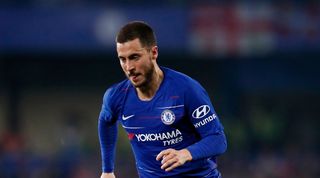 The Blues recorded a 1-1 draw away to Eintracht Frankfurt in the first leg of their Europa League semi-final on Thursday and they are hoping to defend fourth place in the Premier League with two rounds remaining.

While there is much still to play for at Stamford Bridge, the campaign is effectively already over for Zinedine Zidane’s side, stranded in third place in La Liga.

Marca has reported that Chelsea’s fight on two fronts is the main reason that Hazard’s sale has not been confirmed, as the London club do not want to undermine manager Maurizio Sarri by announcing the deal during the run-in.

Talks are understood to have taken place in private and the deal could be announced as soon as May 12 if Chelsea fail to reach the Europa League final.

The final round of Premier League matches will take place on that day, although the outlet points out that Madrid usually wait until the end of their own domestic season before announcing new signings, which could take the date of the confirmation to after May 19.

However, the fee is yet to be agreed with Chelsea demanding €140 million (£120 million), an amount the Spanish giants originally didn’t want to spend on a player entering the final year of his contract.

The outlet believes that Los Blancos have now accepted that they will need to break their own transfer record (£86 million for Gareth Bale in 2013) to sign the Belgium international.

Big changes are expected at the Bernabeu this summer after a disappointing campaign in which Real have failed to challenge Barcelona for the league title and were knocked out of the Champions League at the last 16 stage by Ajax.