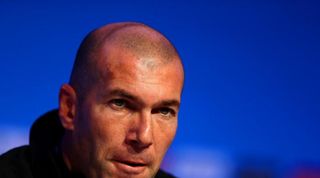 It emerged on Monday that the Spanish Football Federation's (RFEF) Competition Committee had suspended Zidane due to the 42-year-old not holding the necessary qualifications for the role.

Real released a statement insisting they would aggressively fight the RFEF's decision on the basis that Zidane had obtained the required qualifications in his homeland, France.

The case reached Spain's Administrative Court for Sport on Friday, with the body agreeing to suspend the punishment while the appeal process took place, opening the door for Zidane to take up his spot in the dugout for Saturday's clash with Rayo Vallecano B.

A statement on Real's website read: "Real Madrid CF communicates that the Administrative Court for Sport has granted the precautionary suspension requested by the club, allowing the manager and assistant manager of Real Madrid Castilla, Santiago Sanchez and Zinedine Zidane respectively, to carry out their professional activity as soon as the Real Madrid's appeal against the decision from the Appeals Committee is resolved."

Zidane joined Castilla in the close season having previously worked under Carlo Ancelotti with the senior team.