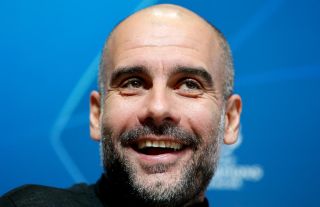 Zidane is preparing his Real Madrid side to face Manchester City at the Bernabeu on Wednesday night.

The two heavyweights of European football face-off in the first-leg of their Champions League round of 16 tie.

Zidane faces Guardiola for the first time as a manager and is full of admiration for the ex-Barcelona boss.

But, during his press conference, the Frenchman downplayed the coaches battle as he looked forward to the game between two good sides.

"It's Real Madrid vs Manchester City, not Zidane vs Guardiola," the Madrid boss told reporters.

"What people want to see is a game of football between Madrid and City. It's an attractive game."

Zidane, who is enjoying his second spell in the Real Madrid hot-seat, claims Guardiola has proven he's the best coach in the world.

"He's shown it at Barcelona, Bayern Munich and Manchester City," he added.

"There are a lot of [top] coaches, but I think it's him (who is the best manager in the world)."

The 47-year-old has seen his side drop points in their last two games, but is insistent they can bounce back.

"What we have to do is put in a good performance. It's all about that," he explained.

"We have to focus on what we've been doing well, not on one or two bad results. We're playing well and we have to put in a good display tomorrow."

Guardiola will be hungry to defeat Los Blancos and kickstart a charge to win the Champions League before City's two-year ban from the competition comes into effect next season.

Who will win the 2019/20 Champions League? FourFourTwo writers make their predictions

Quiz! Can you name the starting XI from every Barcelona Champions League final win?