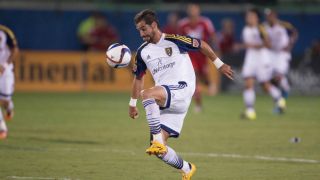 The club has transferred Jaime to Chilean side Universidad Catolica after a season and a half in MLS, during which the 28-year-old notched five goals and two assists in 26 matches. The Argentina native spent four seasons with Chilean club Union Espanola before signing with RSL in August 2014 as a designated player.

"Sebastian made some great contributions to the club and I appreciate coaching a player so committed to the organization," RSL coach Jeff Cassar said in a news release.

Stephen Obayan, nicknamed "Sunny," heads to RSL from from Turkish club Alanyaspor, with the 27-year-old defensive midfielder joining his ninth club in 11 years as a professional. He represented Spain at the Under-19, U-20 and U-21 levels before earning his only senior national team cap with Nigeria in 2010.

"Sunny challenges the status quo," RSL general manager Craig Waibel said. "He's going to force the coaching staff to make tough decisions and force players to perform at a higher level. He's a quality player that we think can contribute right away when he adjusts to the play in America. He's really active, physically adept and technically sound. He covers a lot of space and adds to the quality of our midfield."