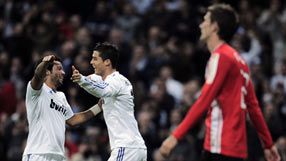 Barcelona, the 2009 winners, also progressed to the last 16 when they battered Ceuta 5-1 in their second leg at the Nou Camp for a 7-1 aggregate success and holders Sevilla thumped Real Union 6-1 on the night and 10-1 over the two legs.

Lionel Messi came off the bench to score Barca's fifth after goals from Nolito, Gabriel Milito, Pedro and Bojan Krkic. However, injury-plagued Milito's night ended on a sour note when he was forced off with what looked like a hamstring strain.

La Liga giants Real went out of the competition at the same last-32 stage in 2009 after a humiliating 4-1 defeat over two legs by Alcorcon, who were then in the Segunda B division, the third tier of Spanish football.

Murcia also play in Segunda B and held the La Liga giants to a 0-0 draw in the first leg two weeks ago, setting up another potential upset.

Real coach Jose Mourinho, who was sent to the stands for protesting in the first half, opted for a largely second-string starting 11 and was rewarded with a goal in the fourth minute when midfielder Esteban Granero curled in a superb first-time shot from just outside the penalty area.

Real dominated possession but failed to extend their lead until just before half-time when Gonzalo Higuain squeezed a shot past Murcia goalkeeper Dani.

Substitute Cristiano Ronaldo continued his rich vein of scoring form in the 75th minute when he popped up at the far post to tap home an excellent cross from Angel Di Maria.

In an eventful finale, Real defender Alvaro Arbeloa picked up a second yellow card and was sent off, Xabi Alonso conceded a penalty converted by Murcia's Pedro, Karim Benzema netted a penalty for Real and Alonso scored from a deflected free kick.

"The Murcia fans will go away feeling happy with the performance of their team because they made it tough for Real Madrid," Mourinho said at a news conference.

"Now we wait for the draw to see who we get in the next round," the Portuguese added.

La Liga side Real Zaragoza were eliminated by Real Betis of the second division on the away goals rule after their tie finished 2-2 on aggregate, while Villarreal, Atletico Madrid, and Athletic Bilbao all progressed comfortably against lower-league opposition.