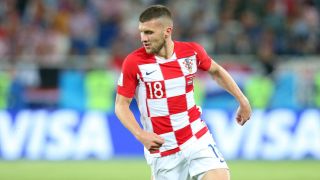 Kovac was officially unveiled as Bayern head coach on Monday, having moved to the Bundesliga champions to replace Jupp Heynckes.

Since joining Bayern, Kovac has been linked with a raid on his old club, with Croatia forward Rebic reportedly at the top of the list after spending two years working together.

Eintracht Frankfurt & star Ante Rebic was asked about former boss Niko Kovac and talks of a reunion at Bayern Munich.Said he’s only focused on Eintracht and July 4, 2018

Asked about Kovac's move and the possibility of joining him, Rebic told reporters: "I've been working with him for a number of years.

"He was very successful [at Eintracht]. He earned his place at Bayern.

"I'm a player of Eintracht and I'm only focused on the World Cup at the moment.

"After the World Cup, then we can talk [about my future]."

Croatia overcame Denmark in a penalty shoot-out to reach the last eight, while Russia stunned 2010 champions Spain by the same method.

Led by Zlatko Dalic, Croatia are viewed as dark horses to win the tournament as they look to surpass the achievements of the iconic 1998 team, who finished third in France 20 years ago.

Ivan Rakitic and team now out for training in Adler.Really relaxed mood as they look to follow in the footsteps and surpass achievements of iconic 1998 team July 4, 2018

"Football was different 20 years ago," Rebic said. "Now we're on a good path. We have great support. I believe in our team that we can do something similar."

As for the challenge in facing Russia, he added: "We have analysed them. We have to focus on ourselves. We have more quality in our team. We will set the tone."