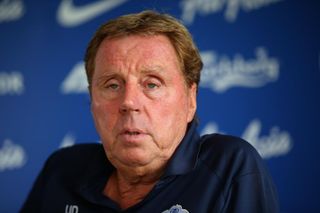 Vargas and Fer went head to head in Brazil, the latter scoring for Netherlands as they beat Chile 2-0 in Sao Paulo to top Group B.

And they could now be set to link up at Loftus Road with Vargas on the brink of a loan move from Napoli, while Fer is set to be signed for a reported £7 million from recently relegated Norwich City.

Redknapp told Sky Sports: "Vargas is a quality player - he is sharp, he is bright. He can play up front, he can play as a No 10.

"I liked him in the World Cup and he's someone we've been following for a while. So we're hoping it's a possibility that we can bring him in.

"We've had reports on him for quite a while. One of our scouts who lives abroad has been following him for years now. It’s not done yet, but hopefully it is going to be done."

And he added on Fer: "He will be an excellent signing - a Dutch international who played in the World Cup. He is an outstanding midfield player and will bring a lot of qualities to the club.

"He's got a great physique, gets box to box - I think he'll be a good signing for us. You need cover everywhere."

Having worked with Kranjcar at Portsmouth and Tottenham, as well as a loan spell in last season's ultimately triumphant Championship campaign - Redknapp is enthused to have the chance to manage the Croatian again.

"He's a player I'm speaking to the chairman about. He's a Premier League player, real quality, who can do things other players can't," Redknapp added.

"He can see a pass and score a goal out of nothing. He's a great lad and a good professional so yes I'd like to get him back here. But we'll have to wait and see."