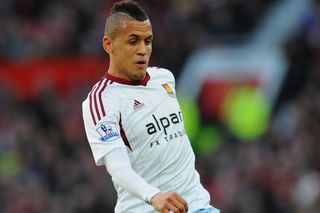 Morrison has played just seven games in all competitions for West Ham since the start of December and speculation has increased the 21-year-old midfielder would like to leave Upton Park on loan.

Fulham was reportedly Morrison's preferred destination during the January transfer window but QPR have firmed as a possible option following Redknapp's comments after the Championship club's 1-0 loss at Derby on Monday.

"I think he wants to come to us," Redknapp told Sky Sports.

"He is a great talent. He can open doors, make the difference. If (West Ham manager) Sam Allardyce wants to loan him, we are here."

Allardyce could be happy to send Morrison west across London after he effectively questioned the former Manchester United player's mental fortitude.

"Ravel is still complaining about the problem that's he had from before Christmas - that he's got a rumbling groin problem," Allardyce said.

"He says he feels it occasionally. Instead of gritting your teeth and getting on with it... he's not the type.

"Lots of players throughout the country will be playing with a similar type of injury that the medical team say 'you can carry on, it's not a problem'."

Morrison has not started an English Premier League match this year and with the likes of Andy Carroll, Stewart Downing and Mark Noble fit again, Allardyce has warned the young midfielder that it will be tough to get game time for the rest of the season.

"What he's got to realise is that, now everybody's fit, there's severe competition here, especially with the new players as well," Allardyce said.

"That severe competition brings pressure on the players that are playing in the first team, knowing that if they perform poorly they could lose their place."