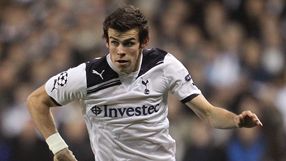 Bale sent shockwaves around Europe after ripping European champions Inter Milan to shreds in the Champions League on Tuesday night, having netted a hat-trick at the San Siro a fortnight before.

Real Madrid, Manchester United and Inter have already been touted as potential destinations for the 21-year-old Welsh international, who is being hailed by some as ‘the best player in the world’.

And Redknapp, who previously insisted that Bale would not be for sale at any price, has confessed that, ultimately, the decision would be down to the owner, Daniel Levy.

“It’s not really up to me,” Redknapp said. “I don’t have any say in the matter; it would be up to the chairman.

“If Daniel came into my office and said ‘someone’s offered whatever for Bale and we want to sell him’ then the club would sell him.

“But hopefully we can keep him here for a good few years to come. I think he needs to stay here and keep developing.”

While there is no doubt Bale was the stand-out player in Spurs’ historical win with a devastating display of power and pace, Redknapp was quick to stress the whole team’s performance.

“Bale was the star of the show,” continued Redknapp. “But he knows it was a team effort and he appreciates that.

“[Luka] Modric was brilliant, [Tom] Huddlestone in midfield and Jermaine Jenas, who came on had great energy. [Aaron] Lennon was in tip top form, [Peter] Crouch led the line well and the keeper, Carlo Cudicini pulled off a world class save just before half-time. So the whole team was brilliant.”