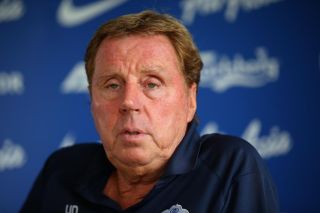 Redknapp endured a miserable return to White Hart Lane on Sunday, as his former club Tottenham consigned Rangers to a 4-0 Premier League defeat.

Having bounced back to the top flight at the first time of asking by winning the Championship play-off final against Derby County in May, QPR have made a poor start to life back in the Premier League having also lost 1-0 to Hull City at Loftus Road on the opening day.

Redknapp has added several new faces to his squad, but the 67-year-old is still eager to bring in more players before the deadline.

"We still need to strengthen if we can, so we might look to bring a couple in if we can find them," he said.

"There are a few loans out there I'm sure, there’s lots of clubs with lots of players and a few players out there won't get in the 25-man squads.

"It depends who's available from any club, if there are one or two around we might be interested but we'll have to wait and see."

The London club travel to Burton Albion for a League Cup second round tie on Wednesday, then host Sunderland in the Premier League on Saturday.