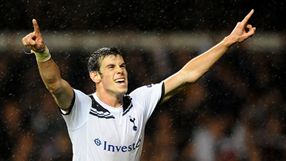 Spurs trailed 4-0 down at half time, but a stunning Gareth Bale hat-trick helped to claw the game back to a more respectable 4-3.

And Redknapp believes his side’s second-half attacking intent is the only option available for the return leg at White Hart Lane.

“There is a feeling that attack is the best form of defence for us,” he said. “We are an open team and I don’t have any options other than to pick an attacking team.

“Unless I leave out Modric and play Wilson Palacios I can’t thicken it up. I have two wingers who have to play and for me there is not a team that I can pick which is defensive. But then, I like attacking teams.”

After sending shockwaves across Europe last time round, man-of-the-moment Bale knows he will be a marked man against the holders, but he is confident there will be no stopping him.

“Obviously teams are trying to stop me, so I've got to think of other ways to get past them,” Bale said.

''Against the world-class players, the likes of [Cristiano] Ronaldo, teams double up all the time. Ronaldo still finds a way. And you’ve got to keep improving your game to be unstoppable.”

European champions Inter are currently top of Group A with seven points from three games, while Tottenham have so far managed a draw at Werder Bremen and a home win over FC Twente.

Nerazzuri manager Rafa Benitez returns to England for the first time since departing Liverpool in the summer.

Benitez did not find White Hart Lane a happy hunting ground during his time in the Premier League, with his last three visits all ending in defeat.